I'll be home for Christmas


I'm taking a BOY home with me for Christmas for the first time ever. This is a big deal. This is serious. I guess it goes with the whole engaged thing (which, I guess IS quite serious).  :)

I'm excited/nervous to incorporate Preston into our family Christmas. Will he have fun? Will he think it's weird that my parents buy 90% of the gifts that they give to my brother and I from Costco? (I NEVER have to buy shaving cream!!) Will he be as moved as I am by the candlelight Christmas Eve church service I attend with my mom? (Unlikely.) Will he survive the high pressured shower in the guest bathroom? Will we survive actual COLD weather??

I've been fortunate enough to have never spent a Christmas away from my family. I'm very grateful to Preston for giving me another year with them at Christmastime.

This is also Preston's first time visiting my hometown :) I'm beyond excited!!

So, I'm leaving on a jet plane!! Let's hope it makes it to the east coast...what with the end of the world and Draco Malfoy's monster storm in the midwest threatening...just getting there at all will be a Christmas miracle ;)


Posted by KellVille at 6:40 AM No comments:

I once read that Jennifer Aniston ate the same exact salad the entire time she was on "Friends" and I thought maybe she was crazy or something.

Maybe I'm crazy too, but know what I'm not? I'm NOT Team Aniston. She was never good enough for him!!

And yes, that star sticker in the background says Kelly is awesome. True story.
Posted by KellVille at 3:11 PM No comments: 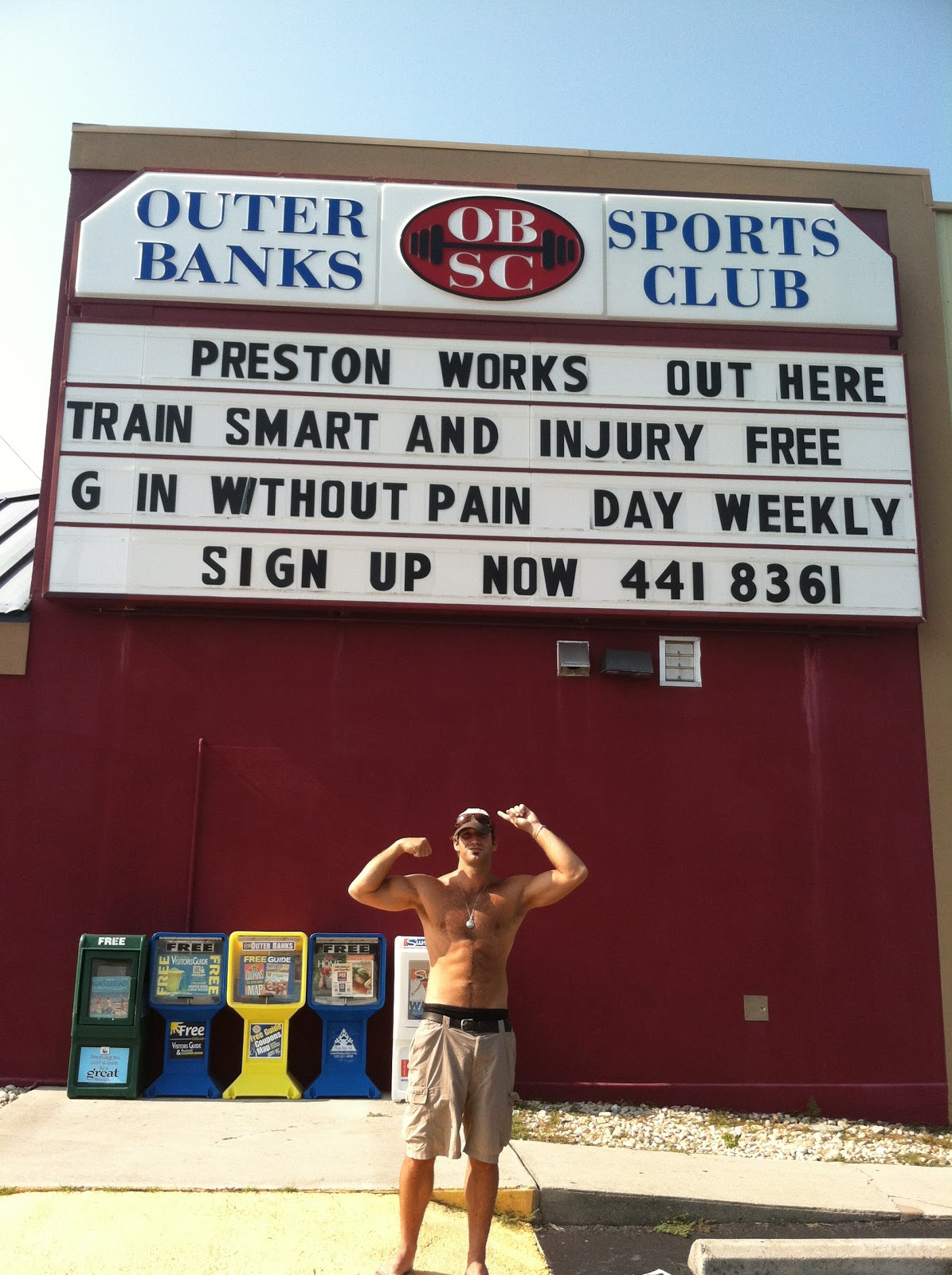 So, my fiance. We'll call him "Preston". Ok, that's actually his real name :P Well, "Preston" is legit upset that my blog is not entirely about him. Haha!! He says that he is an untapped resource. He says that he is like a beautiful violin left unplayed in its case.

I tried to explain to him that while (obviously) he would be featured heavily in my blog...that a blog devoted entirely to him, but written by me, would be...in a word? Creepy. I'm not sure anyone wants to read my blog anyway, but even I wouldn't want to read that.

But, truthfully...Preston is a fantastic person. He's the best person I know :) He's insanely good looking, but humble. He is very funny and uses terrific metaphors about violins in cases. He is smart. He is ambitious and sexy and strong and successful at whatever he puts his mind to. He is honest and loyal and helpful and considerate and nice and hard working and animal loving and kid loving and good dressing and dinner cooking and can eat more ice cream than anyone I know (I think he converts it to muscle??).

Preston somehow missed the memo that most guys these days are jerks. :P One of the things that impressed me most about him when we first met...was that he kept his word!! He called when he said he would...he did what he said he'd do.  How sad for that to be SUCH a rarity in today's dating world??

We've had a terrific love story. As if written from a book. But, that's a story for another day :) I consider myself insanely lucky and blessed that he's chosen me (ME!!) to spend his life with!! 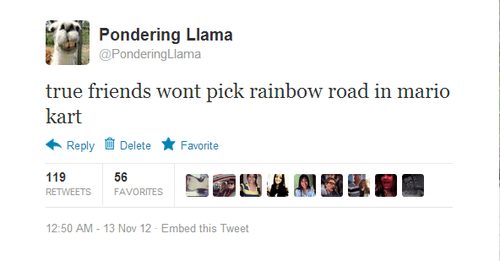 hehe!! My cousin sent this to me this morning. SO awesome and SO true.

I used to be obsessed with Mario Kart. In some groups I was referred to only as TOAD!! (I am ALWAYS Toad) Some friends and I almost failed out of college sophomore year because we were playing that more than studying for exams (my roommate and best friend=not a fan).

Anyway, a great laugh on a frantic Tuesday in my crazy crazy company.
Posted by KellVille at 3:05 PM No comments:

I think what impressed me most about Seattle was all the recycling!! When I first moved out to California, I expected there to be many more environmental and 'green' options, but it was not so :-/ I live in a building with about 8 apartments and based on the population of the recycling bin, I'm the only one using it. But, I digress.

Seattle was all over it!! Every place that we went offered a 'trash' option, a 'compostable' option and a 'recyclable' option at EVERY waste bin. Incredible and I loved it. Way to go Seattle!! I'm still not clear on which is which...but impressed nonetheless.

Nikki was recently diagnosed with Celiac's Disease, which is basically an intolerance to gluten. And let me tell you, gluten is in EVERYTHING. EVERY. THING.

Anyway, this led us to to "The Biscuit Bitch" for breakfast on Sunday.  It was a cute little cafe specializing in...biscuits. I'm not sure if all the biscuits are bitches or if its just a few making a bad name for the many. Typical ;) The food was delicious.

With warm biscuits and teas in our bellies, we headed over to Pioneer Square for Bill Speidels Underground Tour.  It was highly recommended to us by nearly every thing we'd read or heard.  It didn't disappoint.  The tour takes you through doors that lead down into another world with sidewalks and store signs. It mostly  just looks like the basement of an old house. From old photographs, you learn that the 'door' you just came through was really a second story window.  Seattle was basically a city built below or at sea level and had constant flooding problems and thus a very unfortunate sewage problem (the toilets flushed backwards...and rather forcibly). 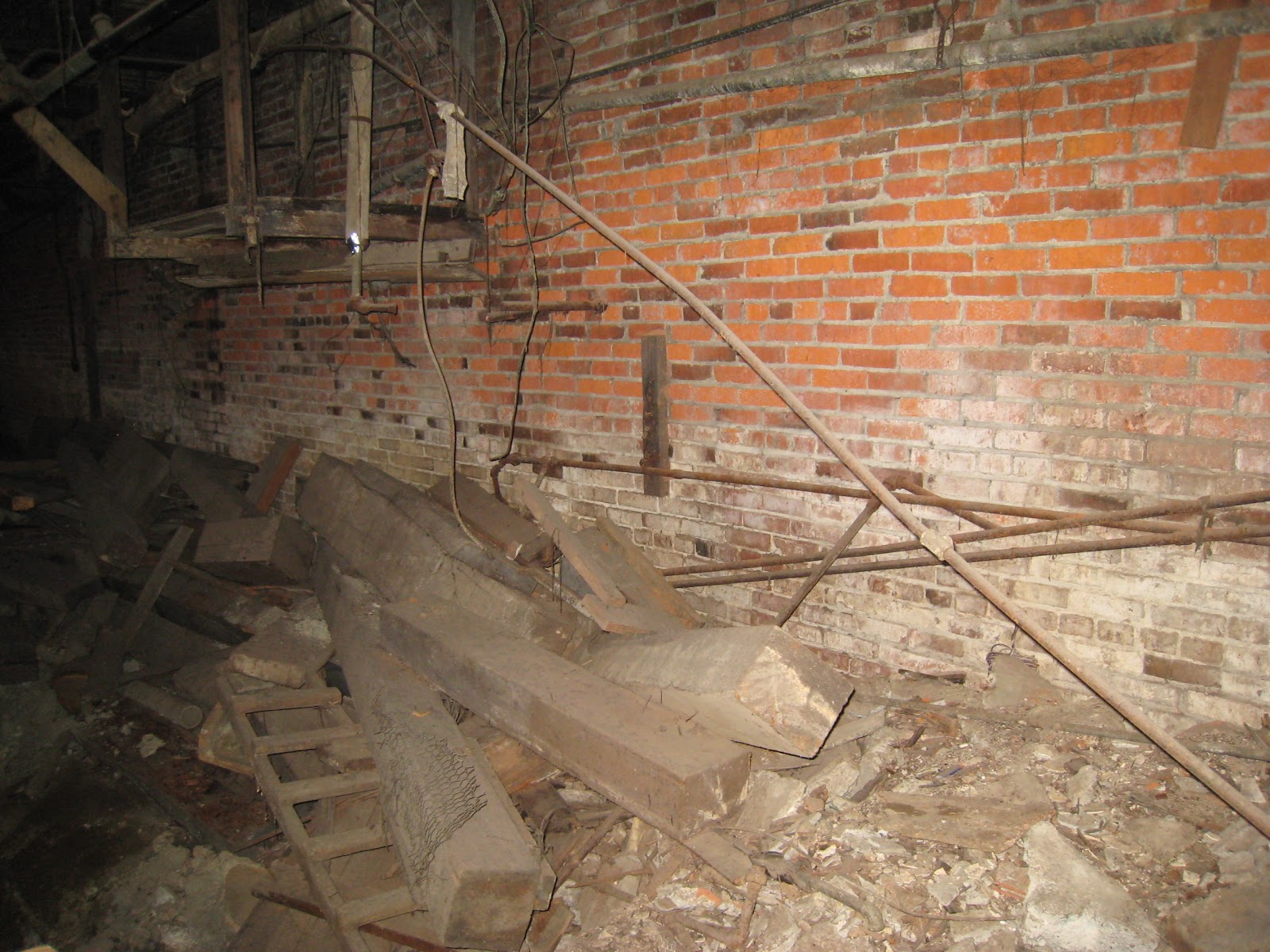 After a fire in 1889, the city was flattened. The great idea to regrade and solve this problem was proposed, but with an anticipated completion in 7-10 years time. Understandably, shopkeepers refused to wait so long to rebuild and immediately rebuilt their shops. As time progressed, the grading eventually caught up to these new shops. Seattle, at that time, was laid out in a pattern just like a waffle. The solution was high streets with ladders to climb down to the front door. Predictably, this led to a lot of problems and was corrected by filling in the first levels.  Needless to say, the tour was an interesting history lesson.

After the tour, we strolled down the hill to board a ferry to Bainbridge Island. For only $7, you can take a round trip to Bainbridge, a cute little village about 45mins away by ferry.  The clear skies made for a beautiful trip across Puget Sound. We could see all of the Seattle skyline. Even though the weather was crisp, we sat outside the whole time. It was so worth it. 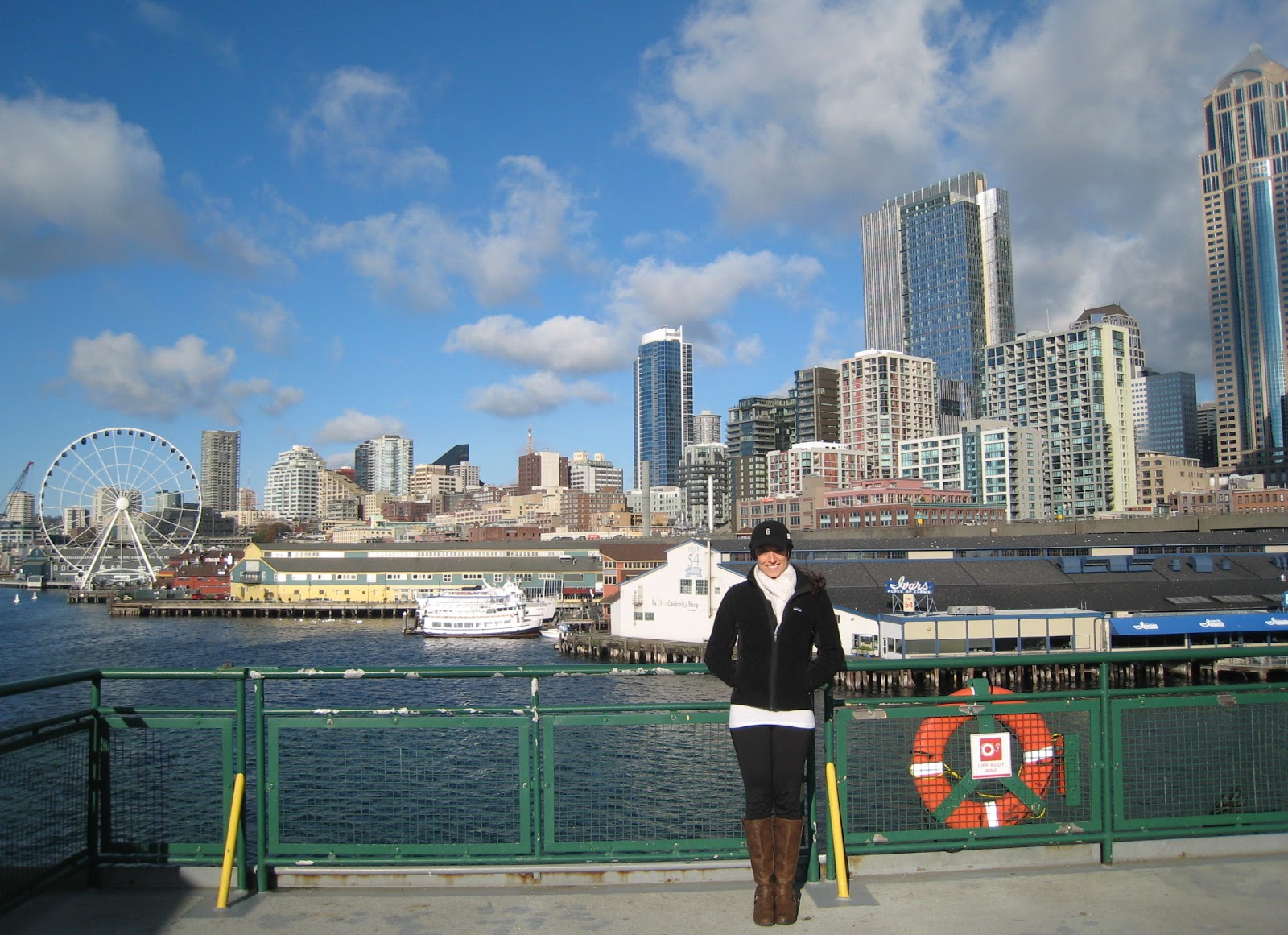 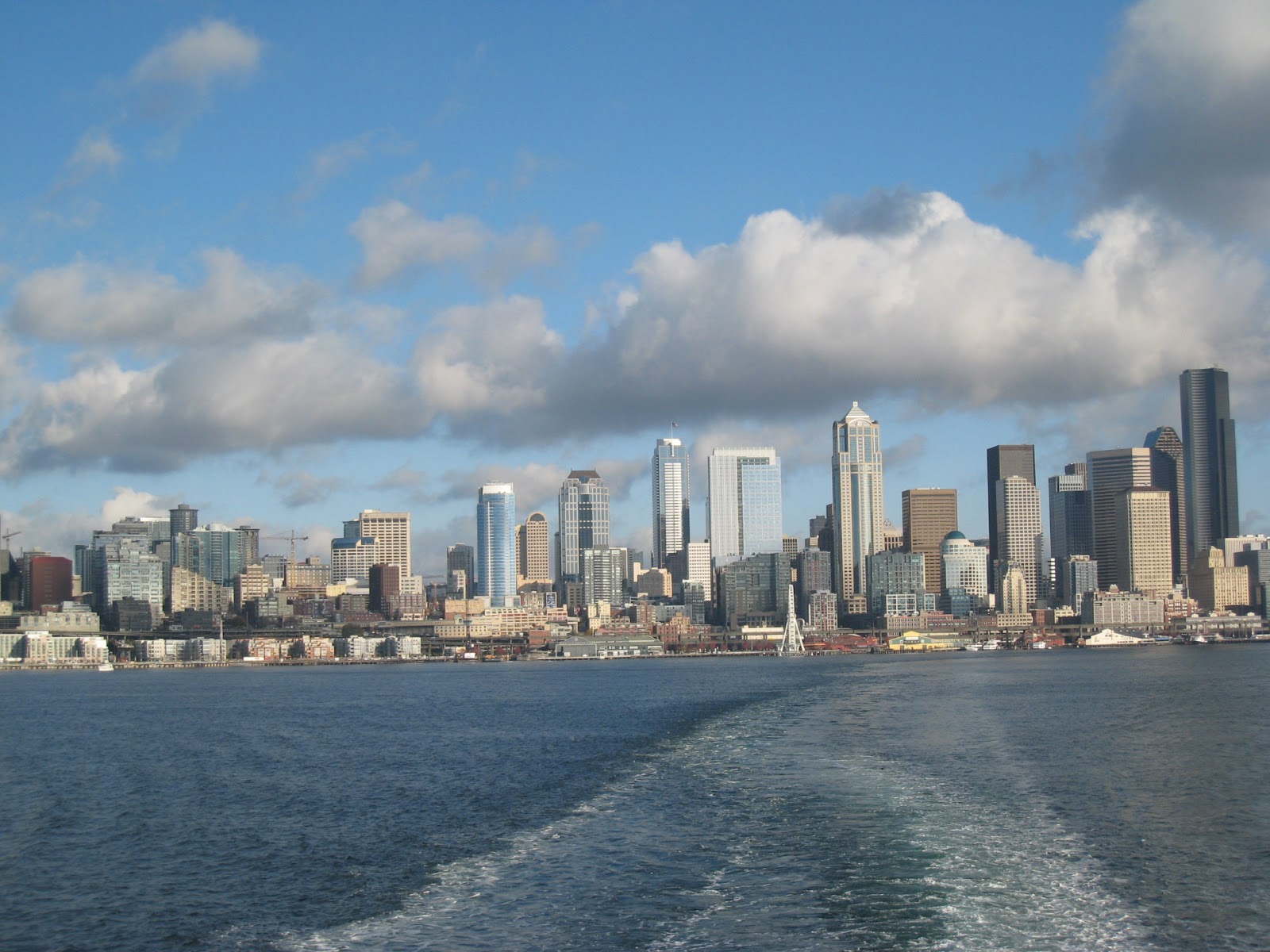 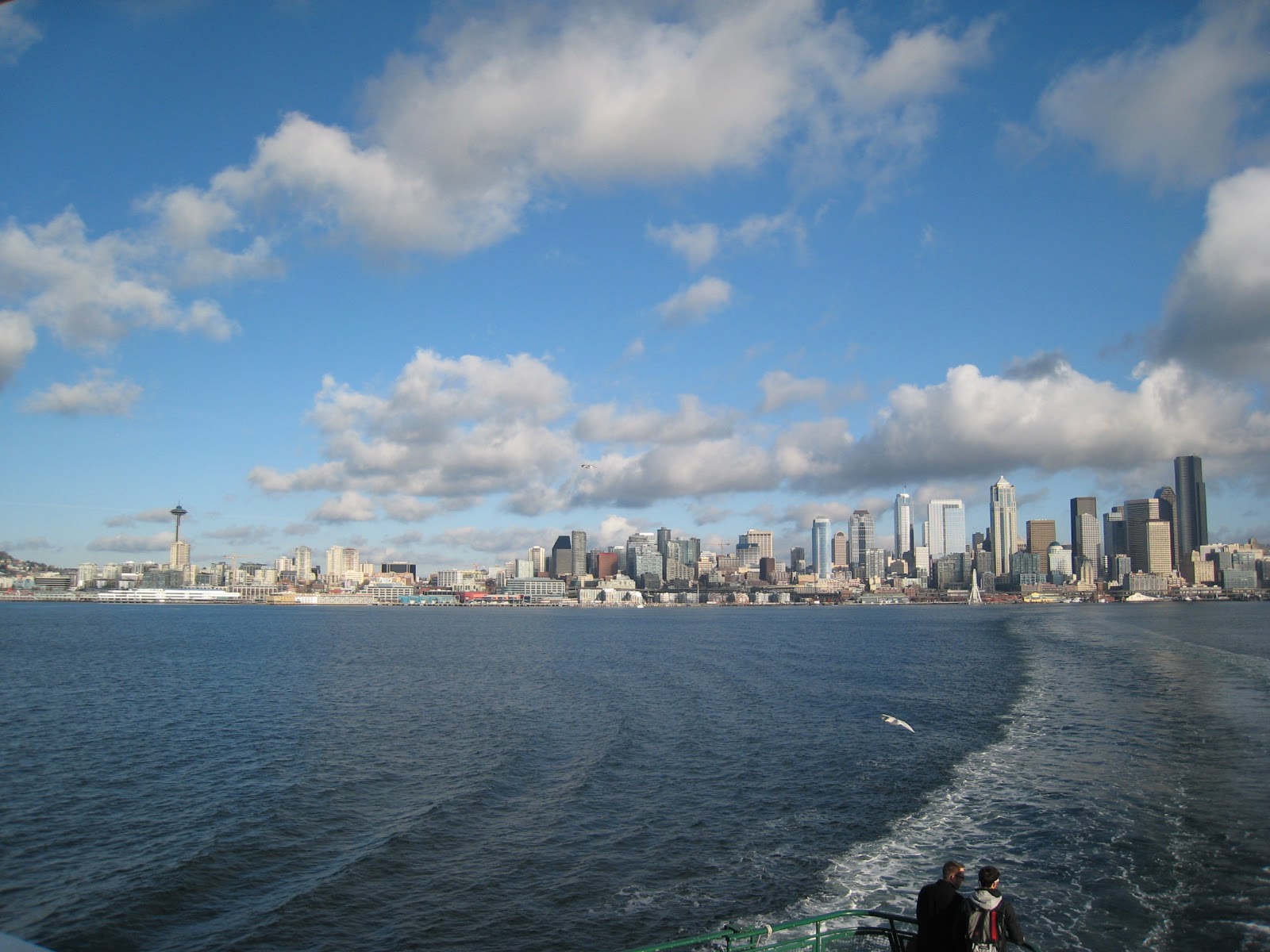 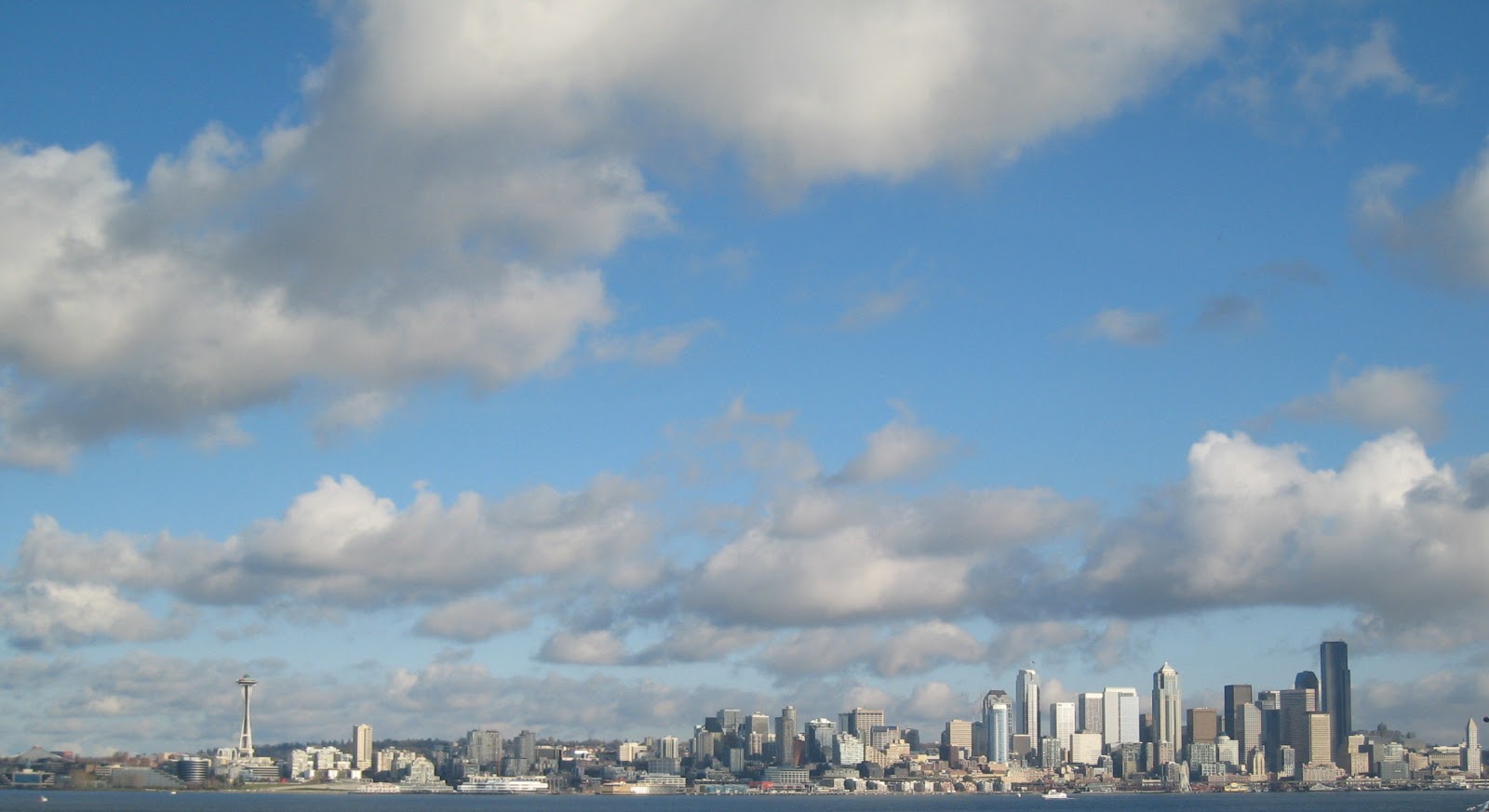 We walked through the little town and decided on lunch at a cafe. To keep with the taste of the region, we  both ordered the dungeness crab (me a sandwich and Nikki a salad). It was delicious. 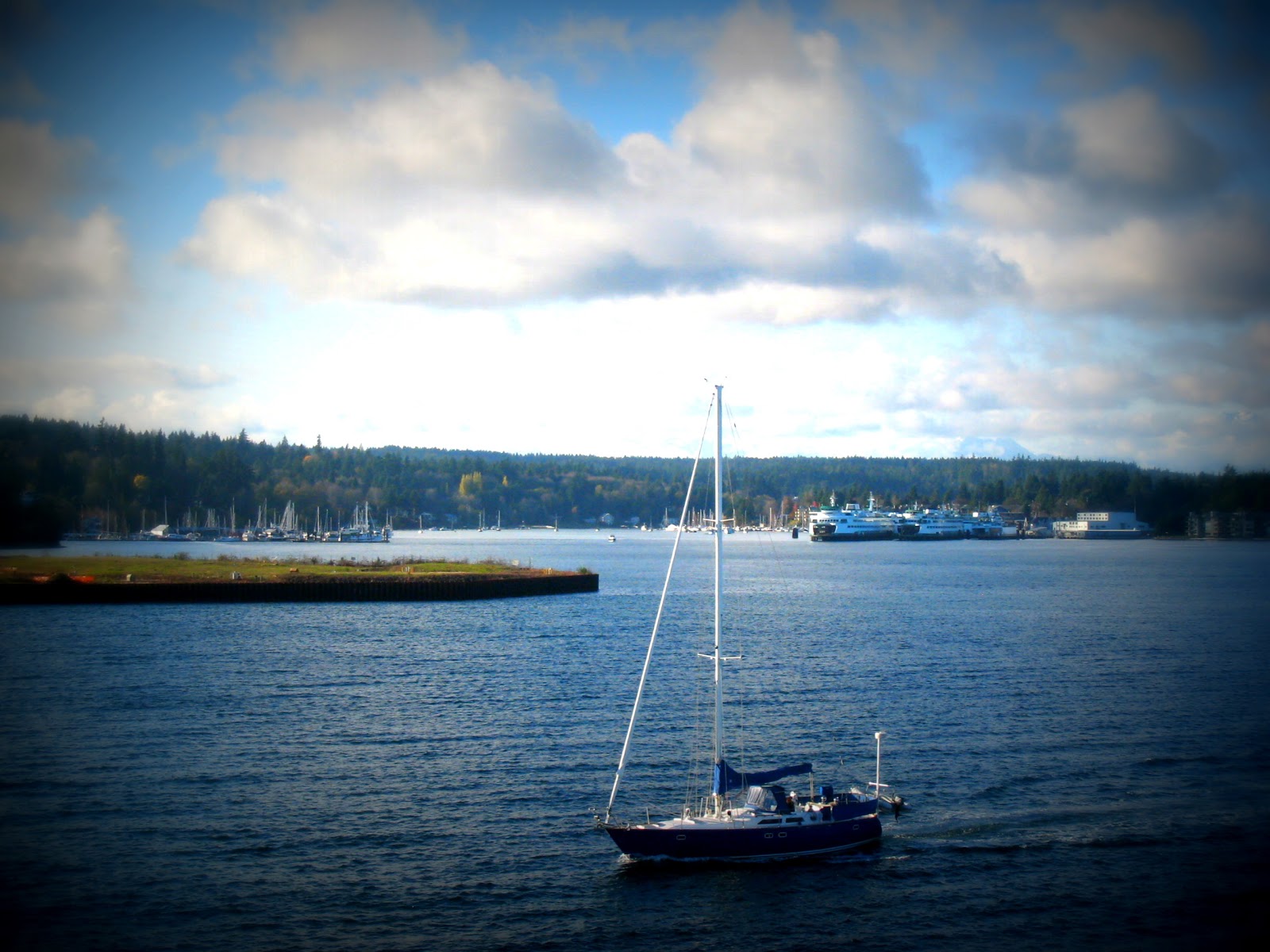 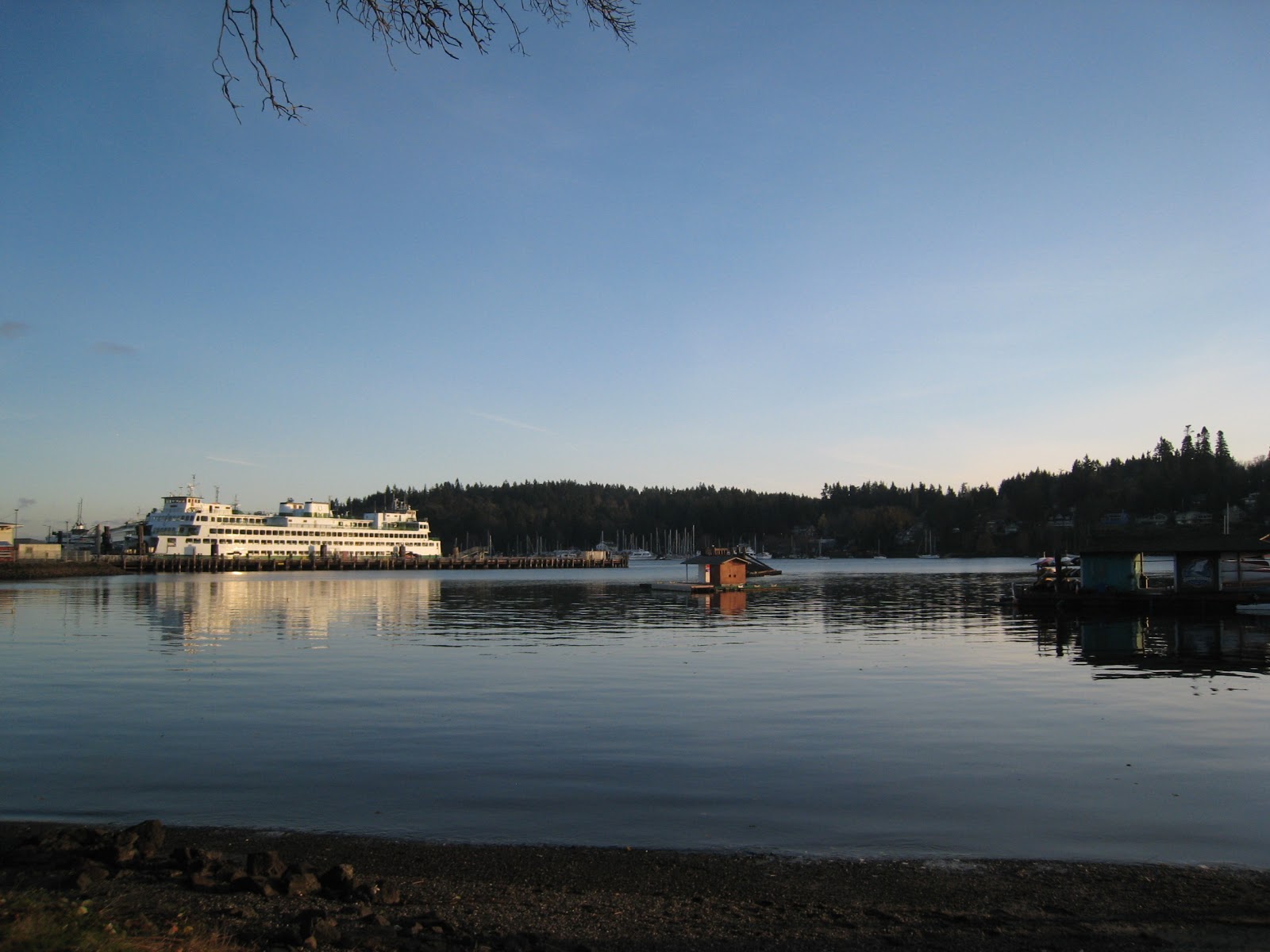 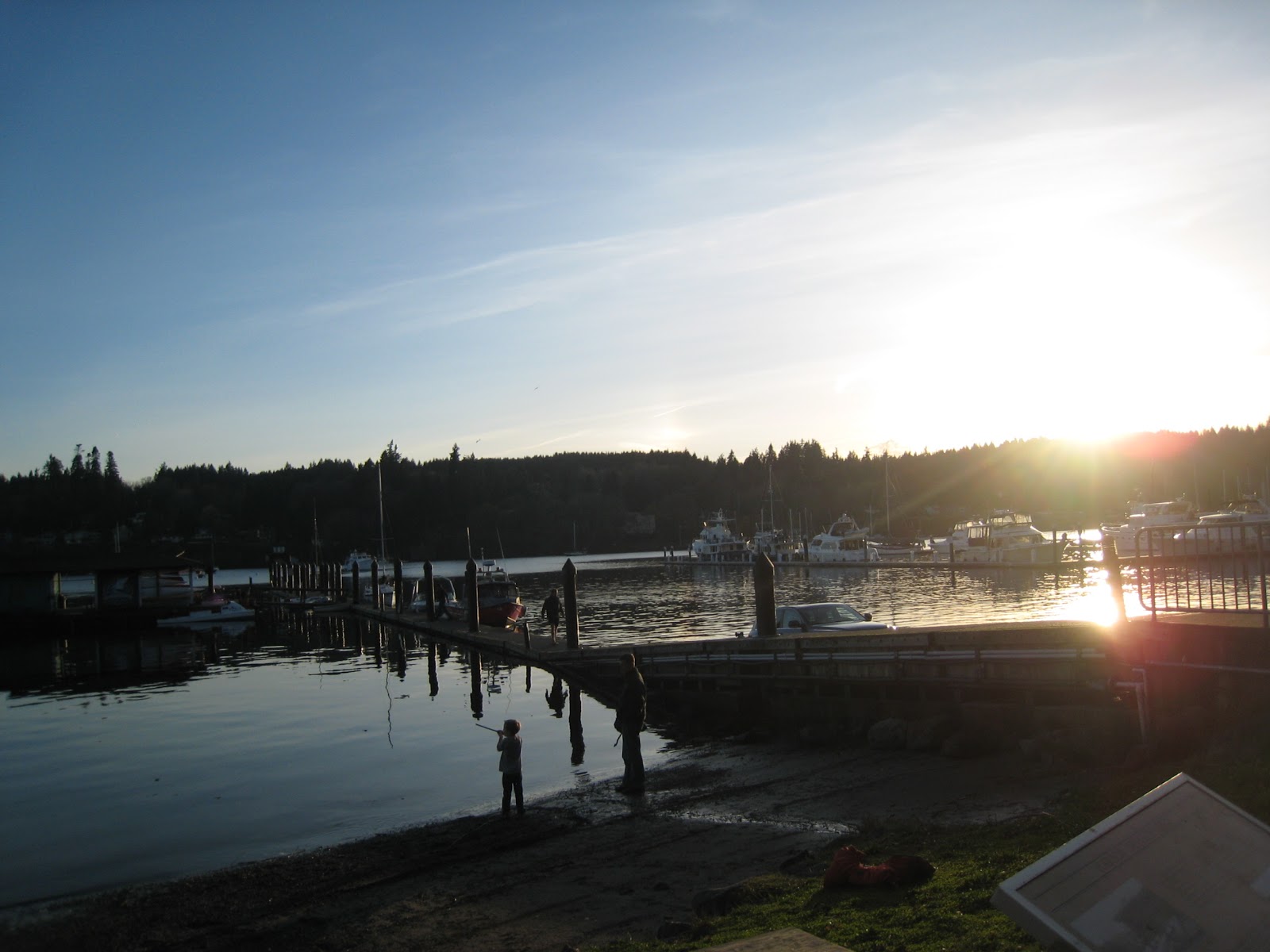 We didn't stay long in Bainbridge, because we had a chocolate tour back on the mainland.  The ride back was phenomenal. For the first time, we were able to see Mt. Rainier in the distance. It is probably the most majestic mountain upon which I've ever laid my eyes. It looked like it was part of the clouds rising up towards the sky. It was also breathtaking to see all the other mountains that surround the city. Right at sunset, the ride was perfectly timed. 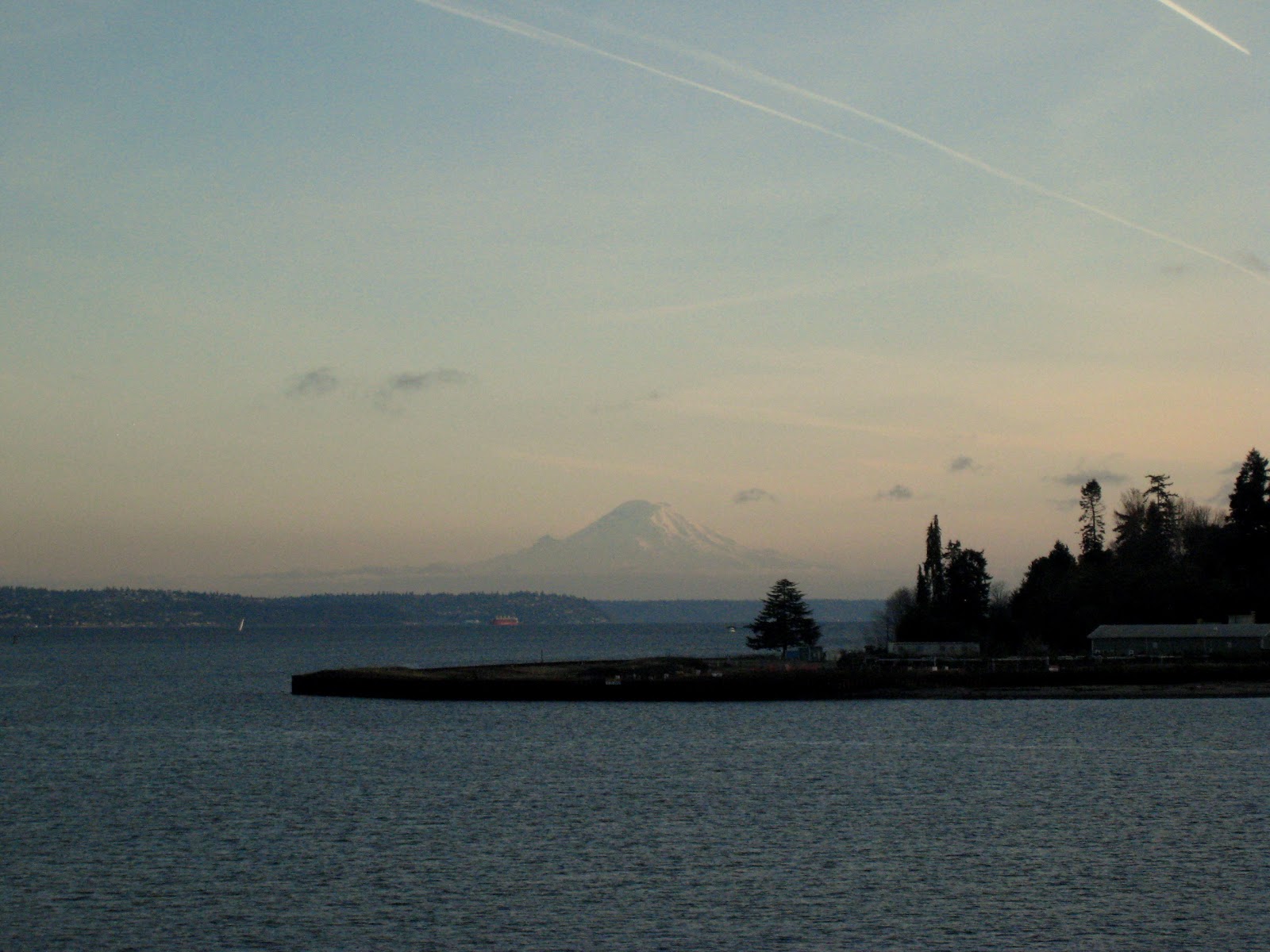 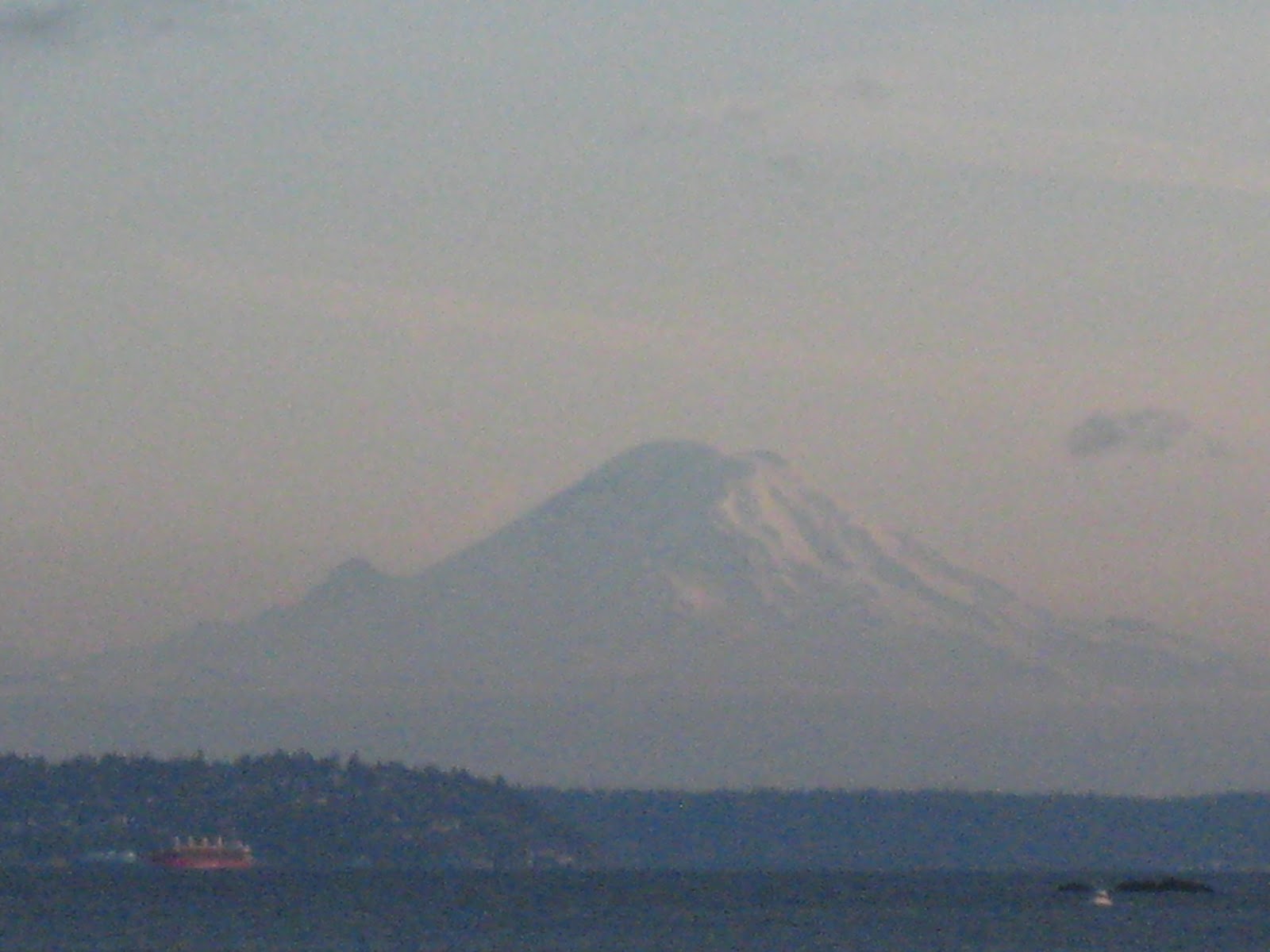 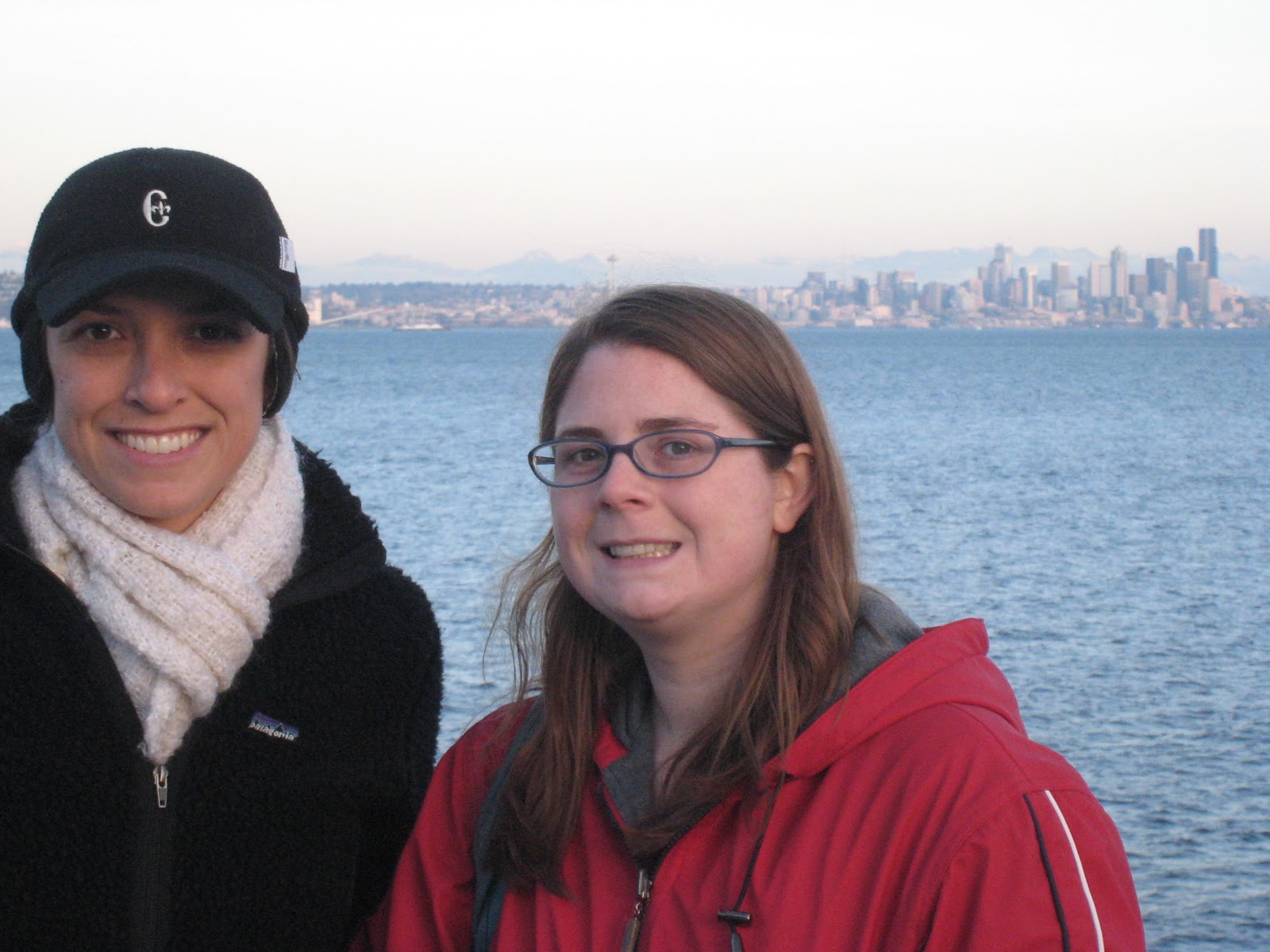 We took a cab to Fremont to tour the Theo Chocolate Factory. The tour was fun, very informative and provided LOTS of free chocolate.  Theo is a 100% organic and free trade operation.  The price of a chocolate bar? $5.50. That's right...in order to ensure that your chocolate provides someone a fair wage, is free of harmful chemicals, child labor and human trafficking (that's right...they said HUMAN TRAFFICKING. For chocolate?! How crazy is that?!)...the bar costs $5.50. That makes me really pause to think about that $0.79 Hershey bar :-/ 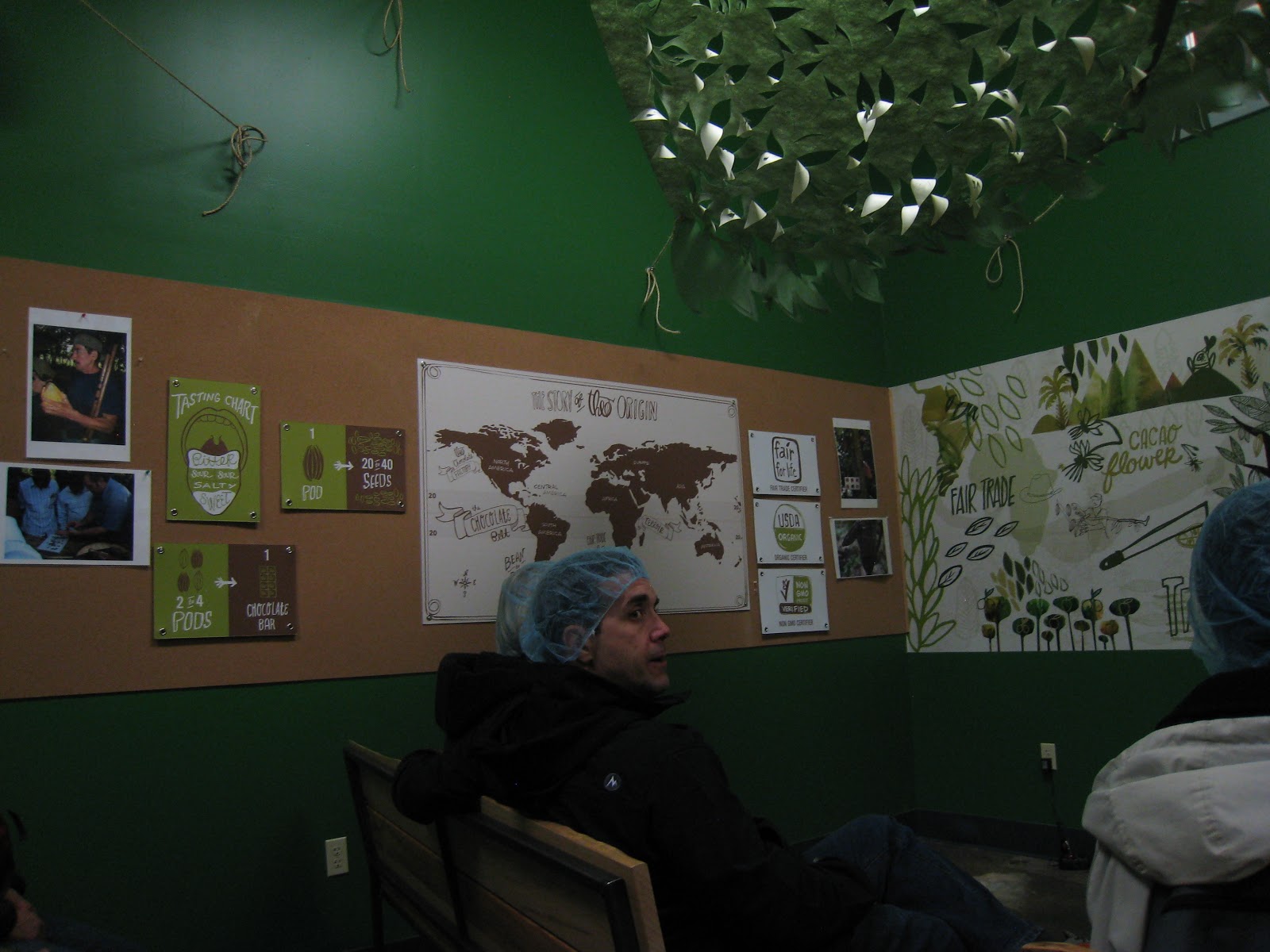 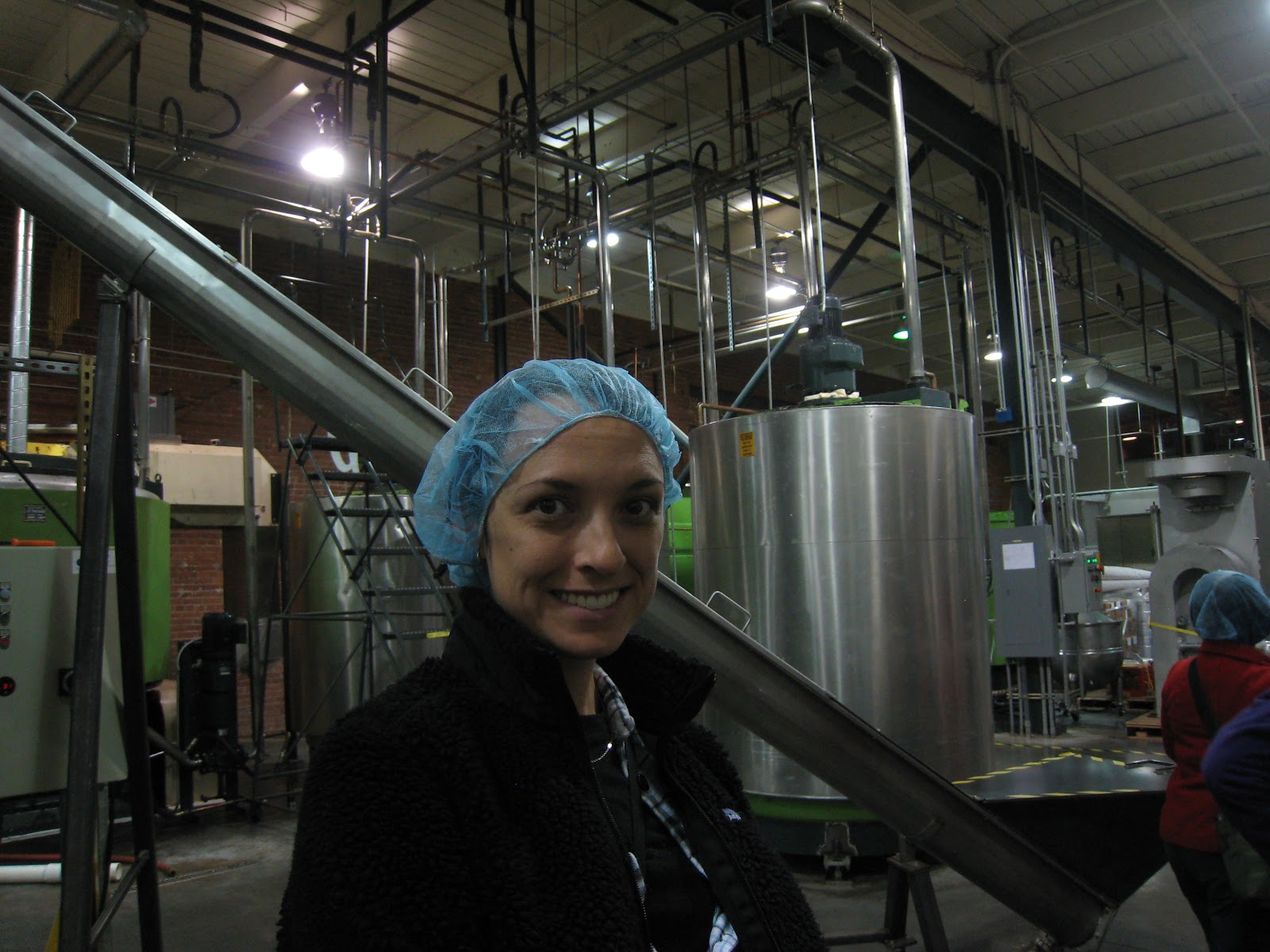 The tour took us through the factory, which was quiet since it was later in the evening  and out into the gift shop. I spent $50 on chocolate at the end, but hey...human trafficking?? They got me.

On our final morning, we stopped by another gluten free pastry shop that was highly recommended online.  The shop is called Coffee & A Specialty Bakery and it was awesome. A (what I think was?) husband and wife run this entirely gluten free shop. I don't have a lot of experience with gluten free foods, but Nikki assured me that the delectable pastries were NOT the norm. The owner explained to us that she was disappointed with the tastes presented in her culinary school when she was learning about Celiacs. While she does not personally have a gluten allergy, she wanted to do better by those that do. It was an inspiring story and their hospitality and free samples were a highlight of the trip.

From there, we headed up another steep and loonngg hill to the Queen Anne District. The views were, again, breathtaking.  It was a great way to end our trip to Seattle. 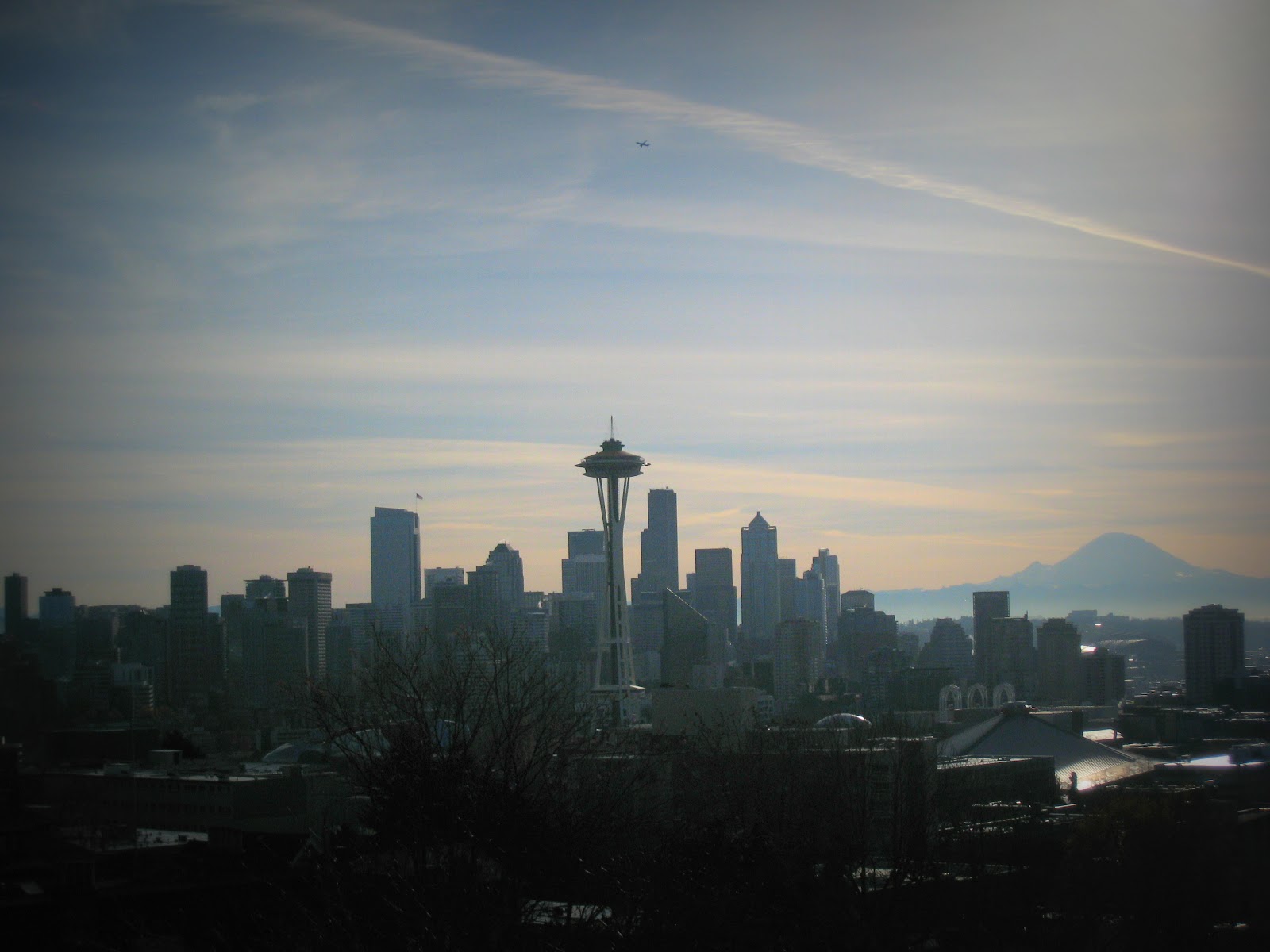 Posted by KellVille at 10:44 AM No comments: