I got to spend a long weekend in Seattle with one of my best friends Nikki. Nikki is great in that she's one of those people that doesn't just talk about doing something...she does it.

I made a pact with myself a few years ago to get a new passport stamp every year.  This year, that proved harder to do than expected...due to some unforeseen work stuff.  I figure as long as I'm out there exploring in a new place(stamp or not!! I mean, my passport is nearly full. Life goal achieved!!)...my wanderlust will be satiated. Nikki has been a wonderful travel partner in many of these adventures.

Since Nikki still lives back east where I grew up, we met at Sea-Tac.  My very friendly seat mate from the plane directed me to the light rail system which took us right into the middle of the downtown.  Turns out this seatmate is also writing the music for a musical about the comedy of Gallagher. That's right...the watermelon smashing comedian. I was intrigued enough to at least check out the website: watermelontears.com.  Gotta love LA ;) You just kind of grow accustomed to these kind of things: "oh hey. You should check out this musical I'm writing. Picture Gallagher. Picture Xanadu."haha. It does look kind of clever.

We arrived in Seattle in the POURING rain. Living in Los Angeles, I often forget what that can be like. Coming in on the plane, I thought to myself, "well this place just looks miserable", but honestly I couldn't have been more wrong. Seattle is such a lovely city.  Nikki and I dropped our bags at the hotel...got as bundled up and waterproofed as we could and headed out to explore.  First stop: Pike Place. 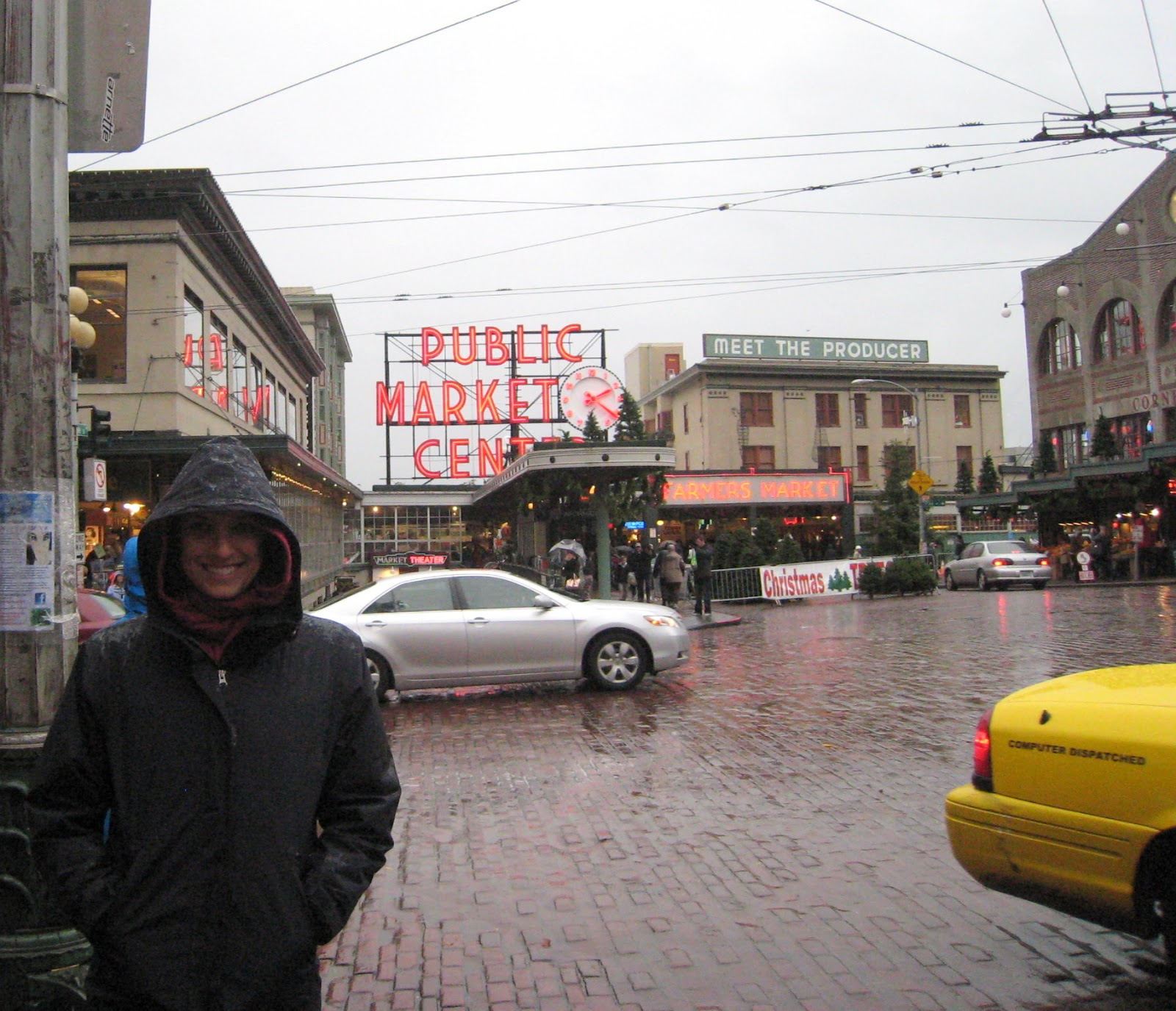 Pike Place is one of Seattle's most famous tourist destinations. It's the home of the yelling fish throwing guys (why are they throwing the fish? It must have served a purpose at some point. As one nearby shopkeeper lamented, it was "much ado about nothing" ha. I imagine it does get old all day every day.), a farmer's market/craft fair and the very first Starbucks. Starbucks before they took over the world that is. What DO they put in that pumpkin spice that makes you crave it as soon as the first leaf falls from a tree??

Even in the rain, we were so impressed with Seattle's charm. People were extraordinarily friendly, quaint bookstores are tucked away in nooks, coffee shops on every corner offer a cozy reprieve from the rain. I could completely imagine living happily there.

There were more homeless people than I would expect in such a rainy climate, but they definitely add color to Seattle's gray tones.  I learned a new word from a lady screaming on a street corner. WHORECAKE!! I'm still pondering that one :P


When I travel, I like to walk. I walk and walk and walk and walk. It's the best way to really see a city. Nikki and I generally cover a lot of ground. We were blessed with amazing weather for the rest of our trip, but I did secretly miss the rain...it's such a rare event in Southern California. 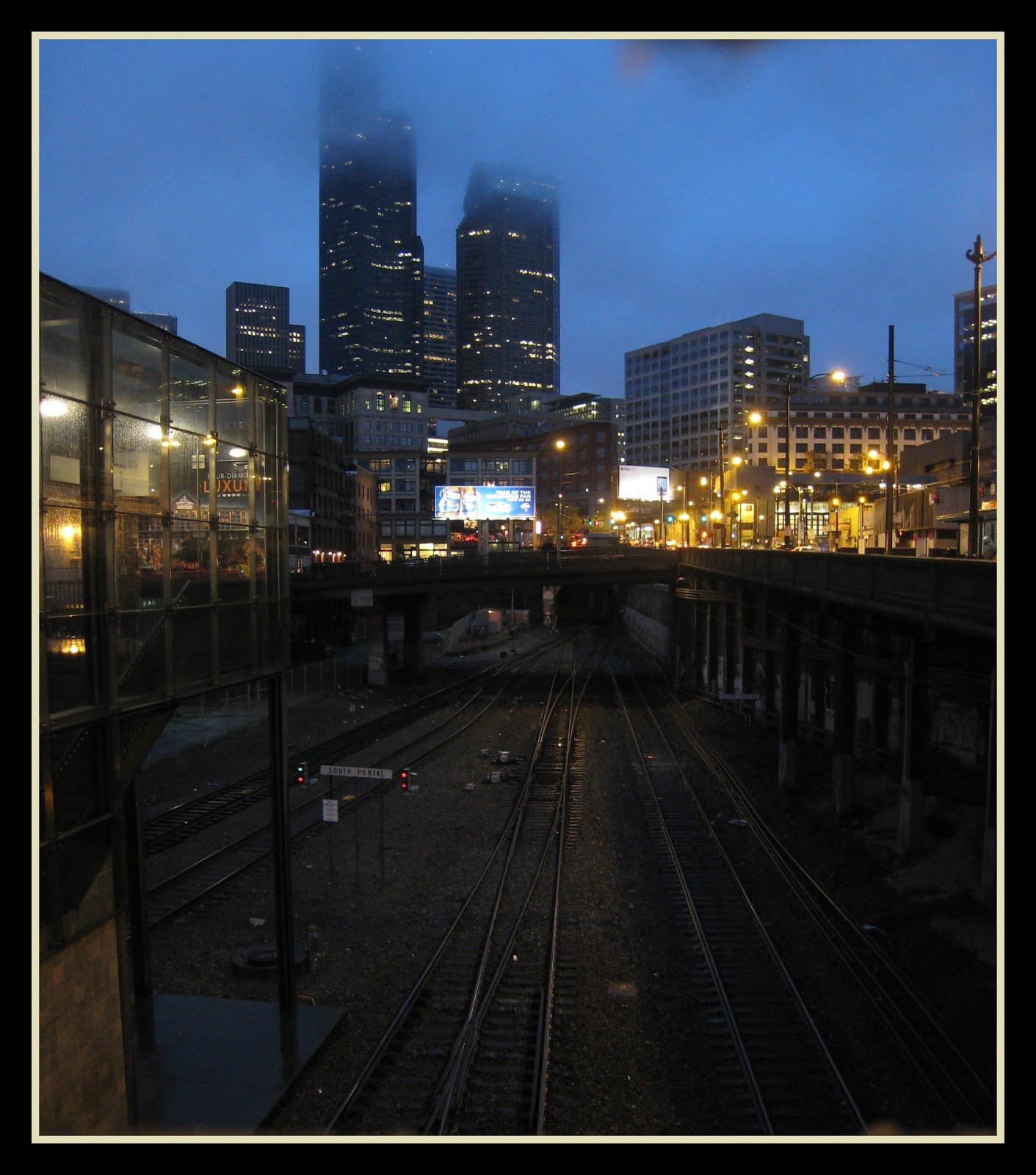 Saturday led us to Seattle Center and the EMP (Experience Music Project) Museum. A $20 cover charge led us through the aesthetically impressive museum. There were two main exhibits, one of which was dedicated to Nirvana. It took me back to 9th grade and was really the only part worth even close to the $20.  Ah, Nirvana how I loved thee. 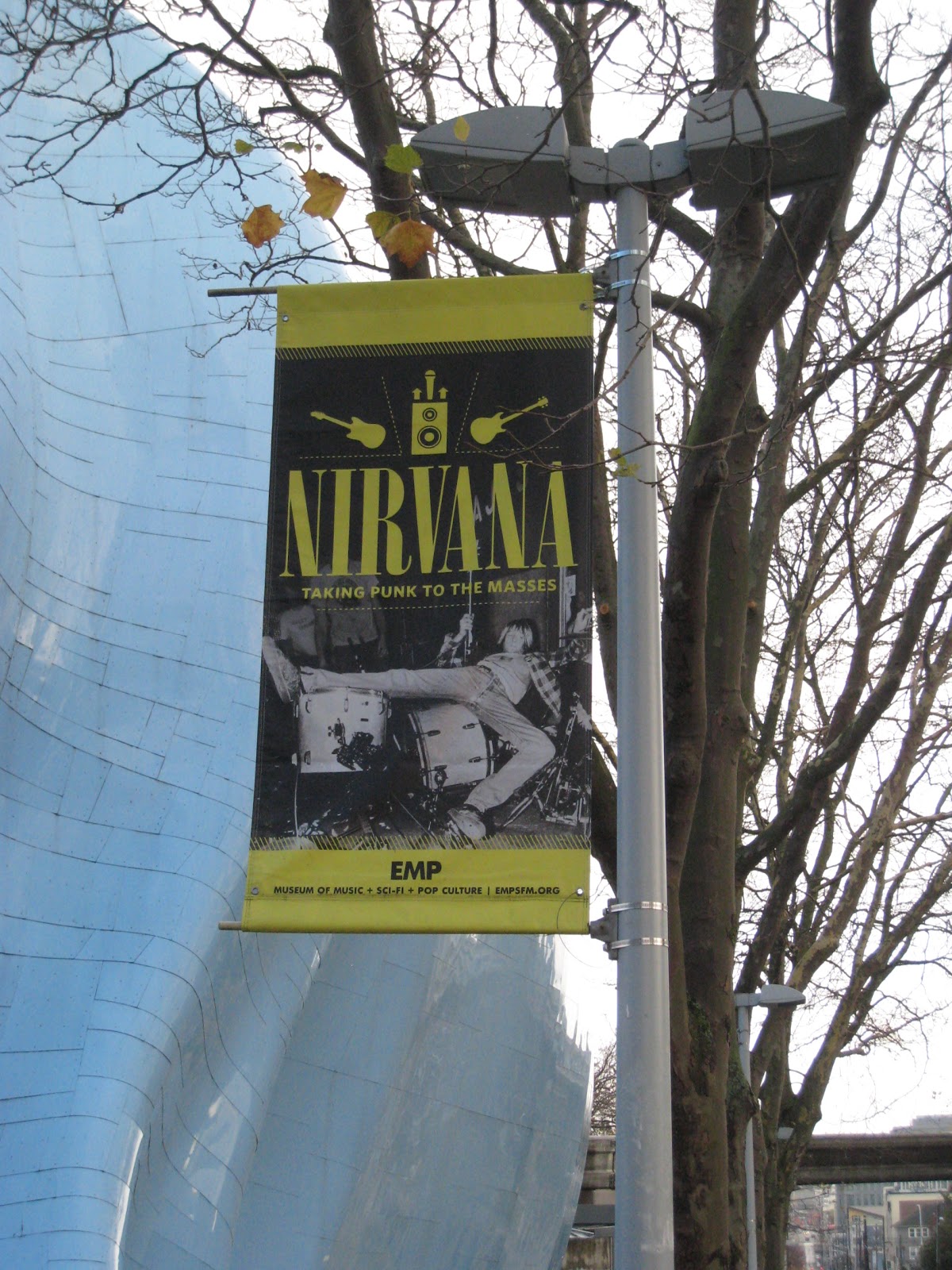 Jimmy Hendrix was the other exhibit. We strolled through, but I've never been a huge fan of his. Obviously I appreciate his contribution to music, but was never as gaga as I was over, say, Kurt Cobain ;) The greasy hair!! The ripped and tattered clothing!! The screeching lyrics!! Ay me, what a strange time adolescence is. In all seriousness though...Nirvana was and is forever amazing.

The top floor of the EMP was a music lab, but being that it was a Saturday, children had the rights to most of the fun ;)

The EMP sits on the same plaza as the famous Space Needle, so we strolled over to see if we could squeeze in for a lunch without a reservation.  We could!! It was a bit pricey for brunch, but completely worth it with the spectacular 360 degree view (the restaurant SPINS!!), mouthwatering food and included access to the observation deck.  I ordered clam and corn chowder followed by salmon and kale with macadamia nut/white chocolate bread pudding for dessert. It was simply, amazing.  This is a Seattle MUST. 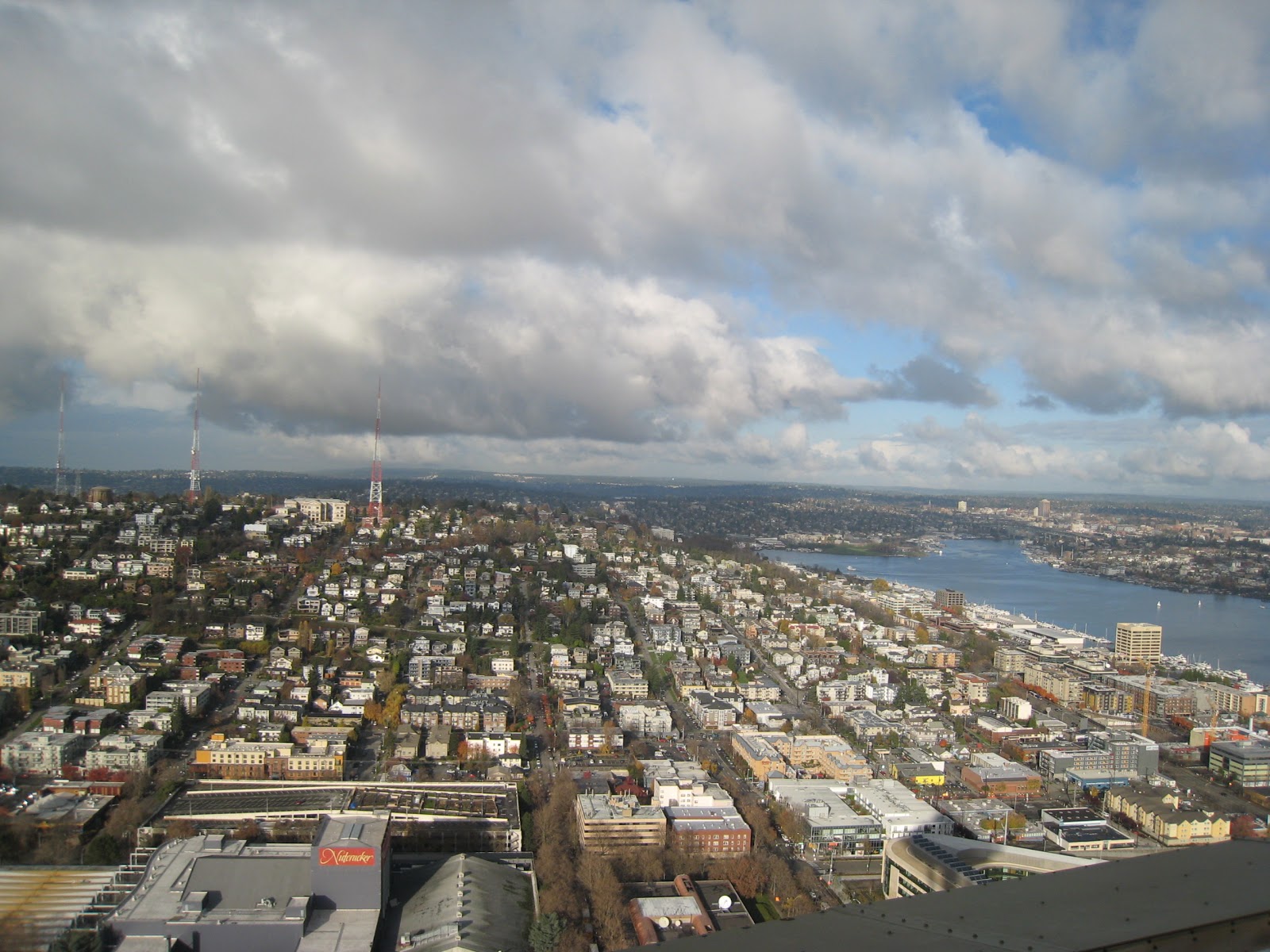 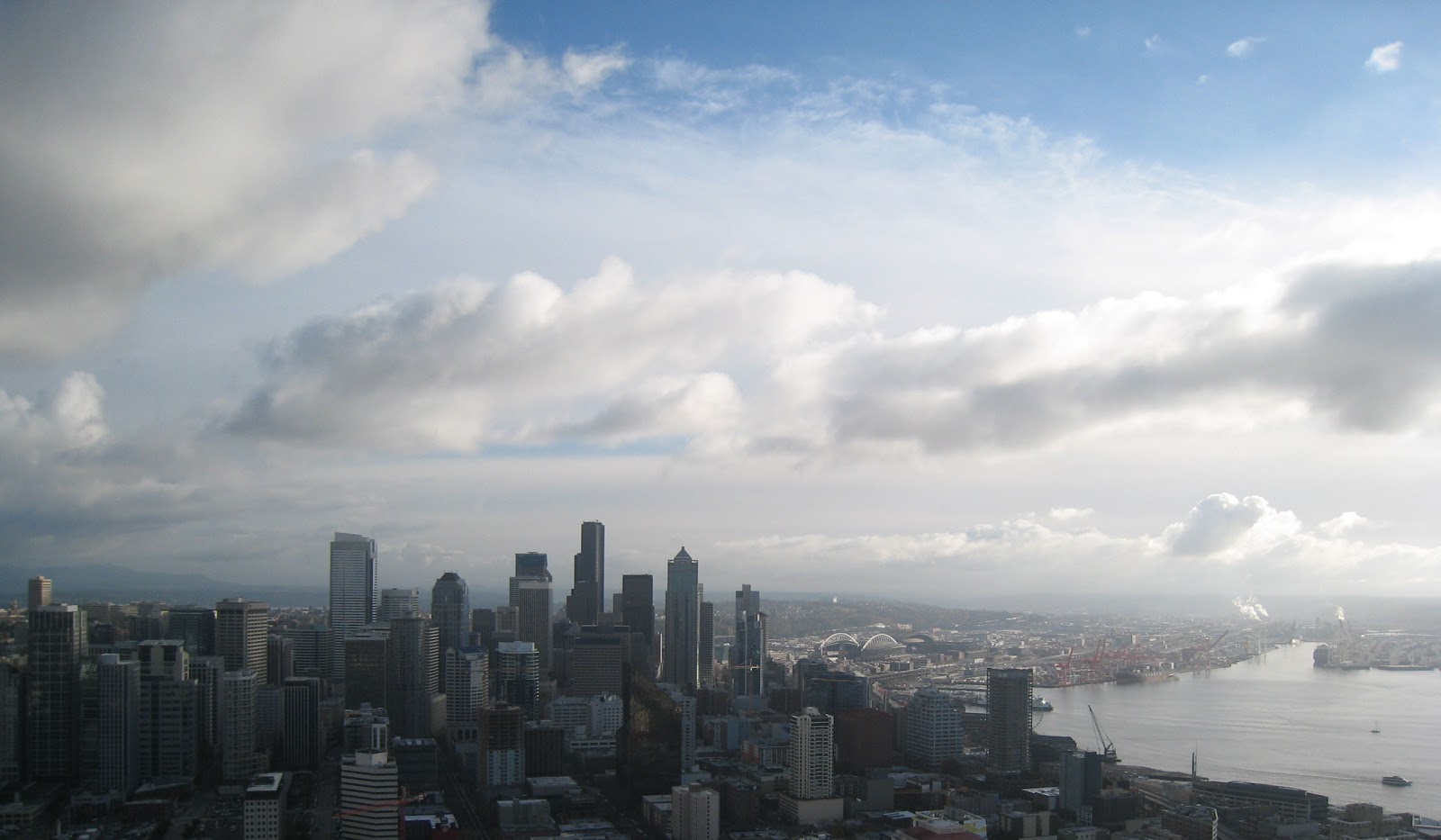 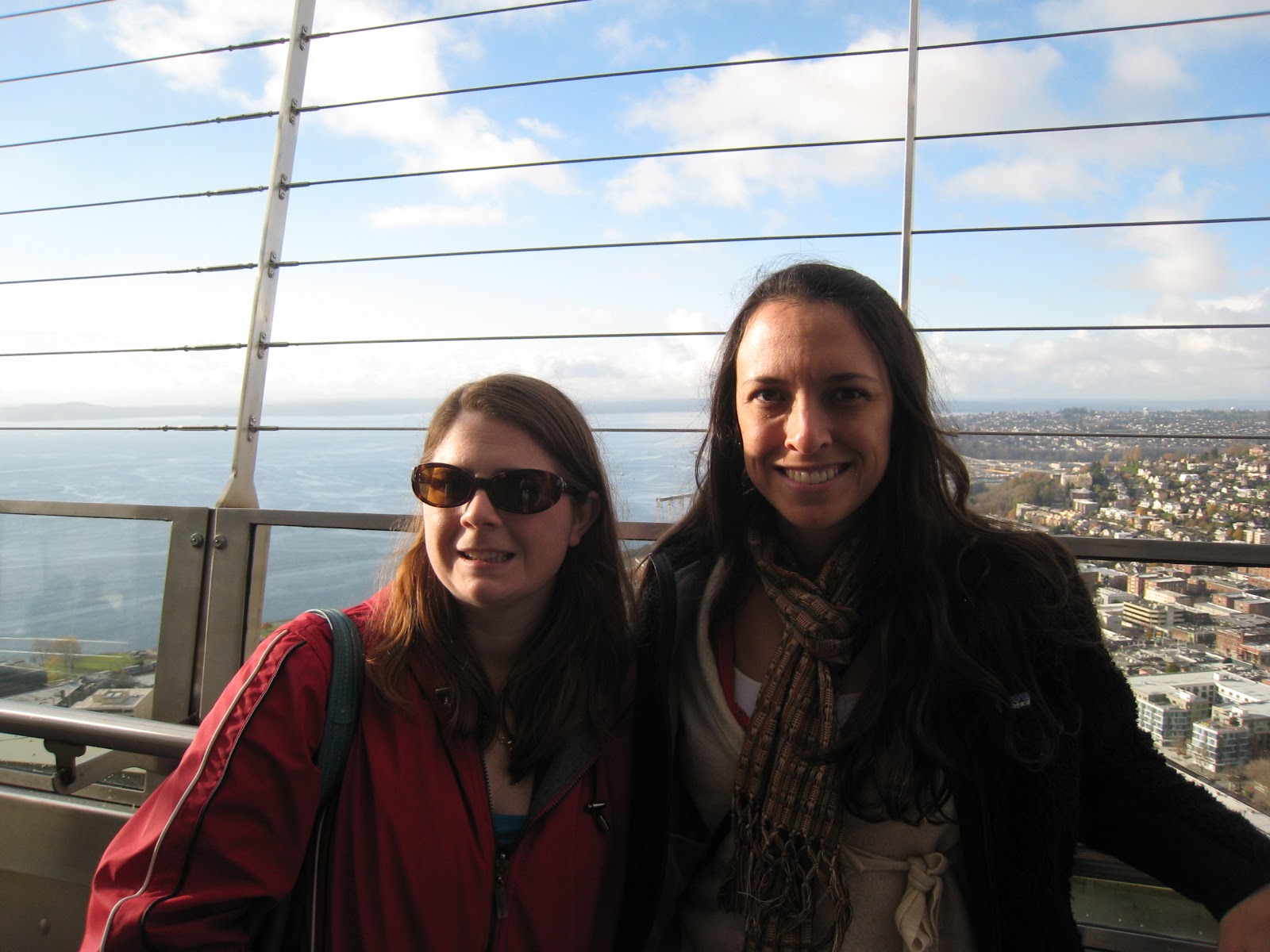 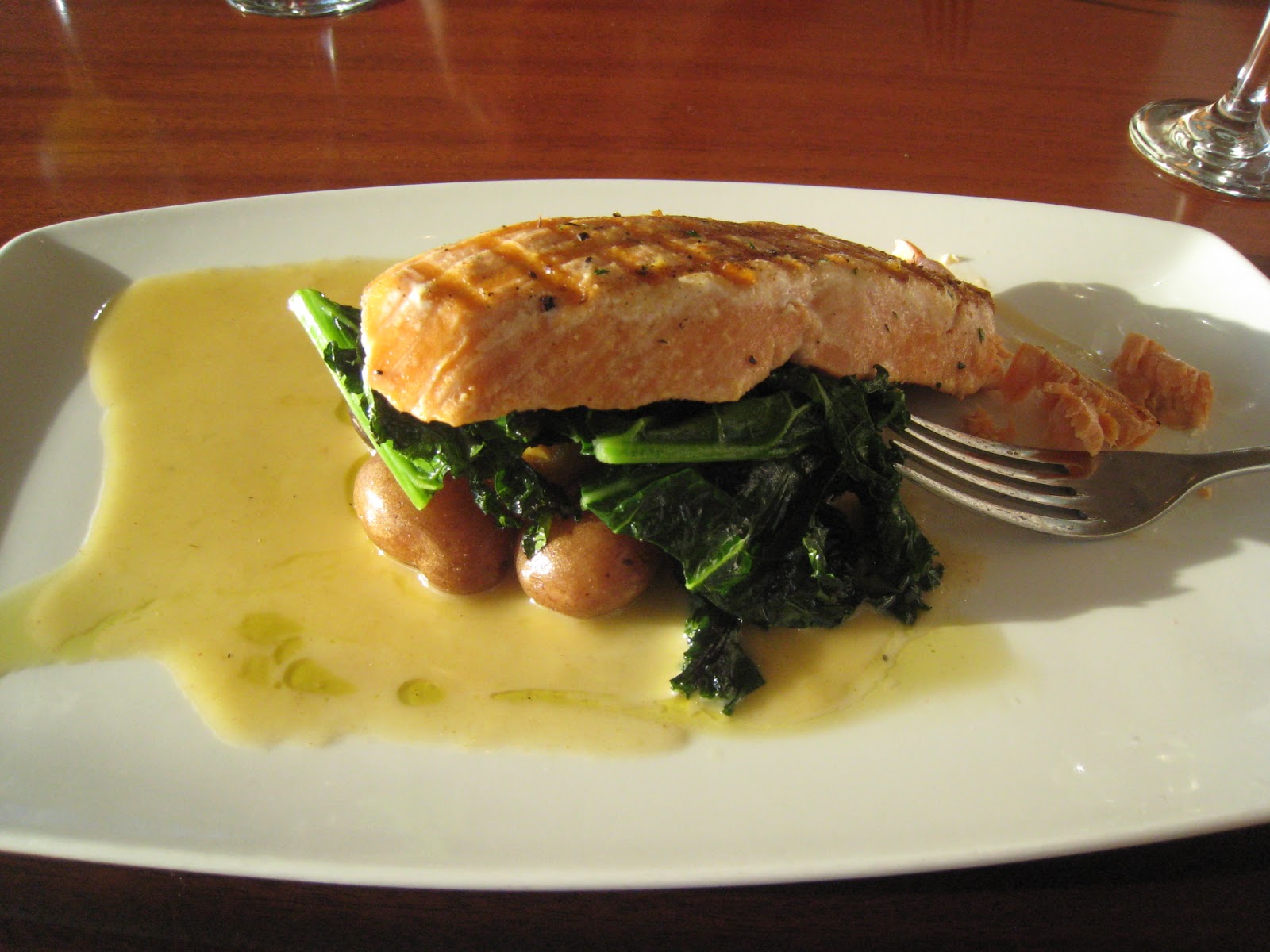 We made up for our delicious lunch with about a 3 mile walk up to the Capitol Hill area and Lakeview Cemetery, where Bruce Lee is buried.  Turns out Seattle is a very hilly city (who knew?!) and the walk was a rigorous one that included the longest and most steep flight of stairs I've EVER climbed. I was regretting that bread pudding around this point ;) 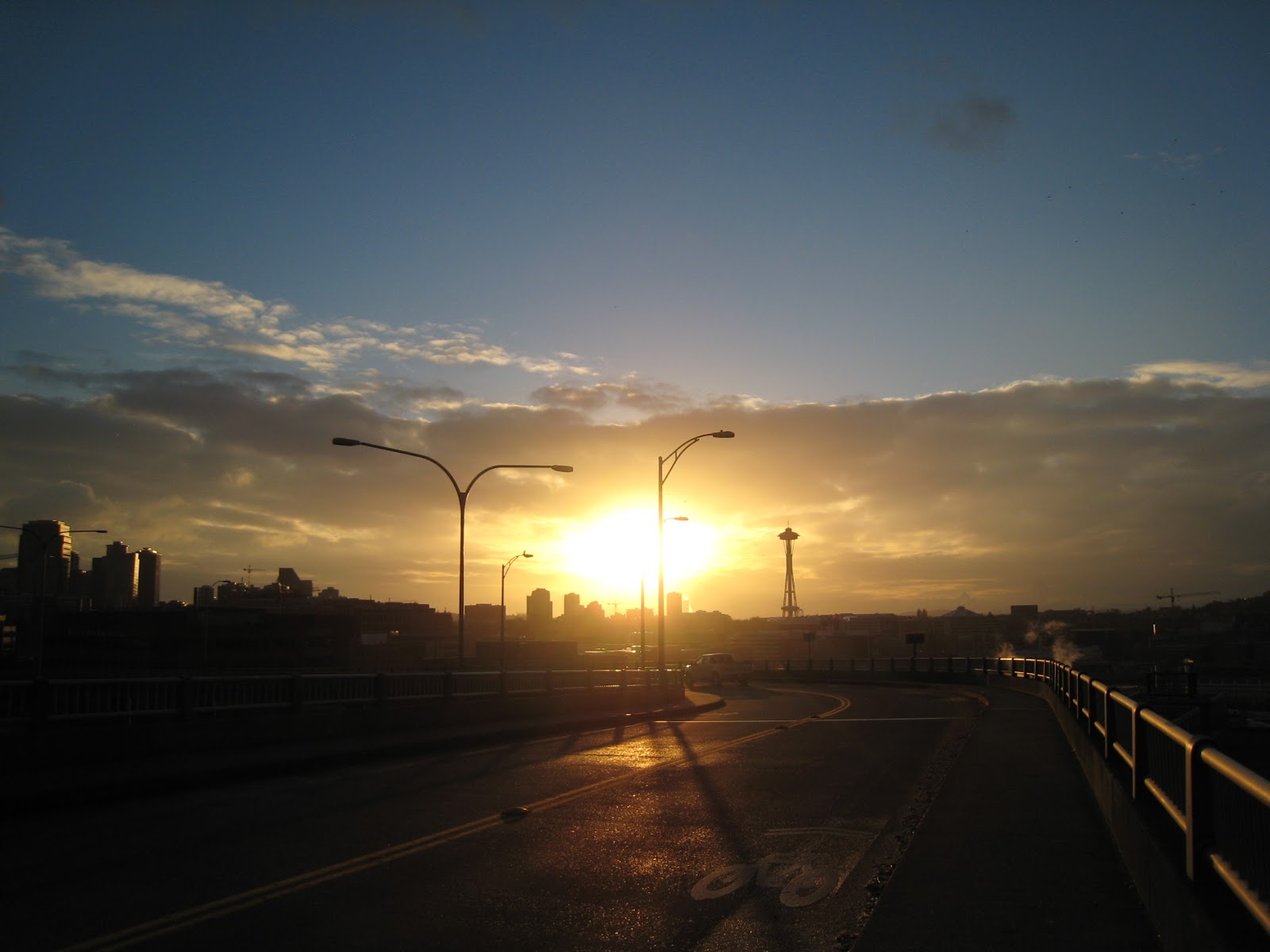 Nikki and I arrived at the cemetery just as it was getting dark.  The sign on the gate said it had closed 10 mins prior, but the gate was still open. Did we risk it? We did!! Luckily we got to walk around a bit without getting locked in thanks to the friendly security guard. 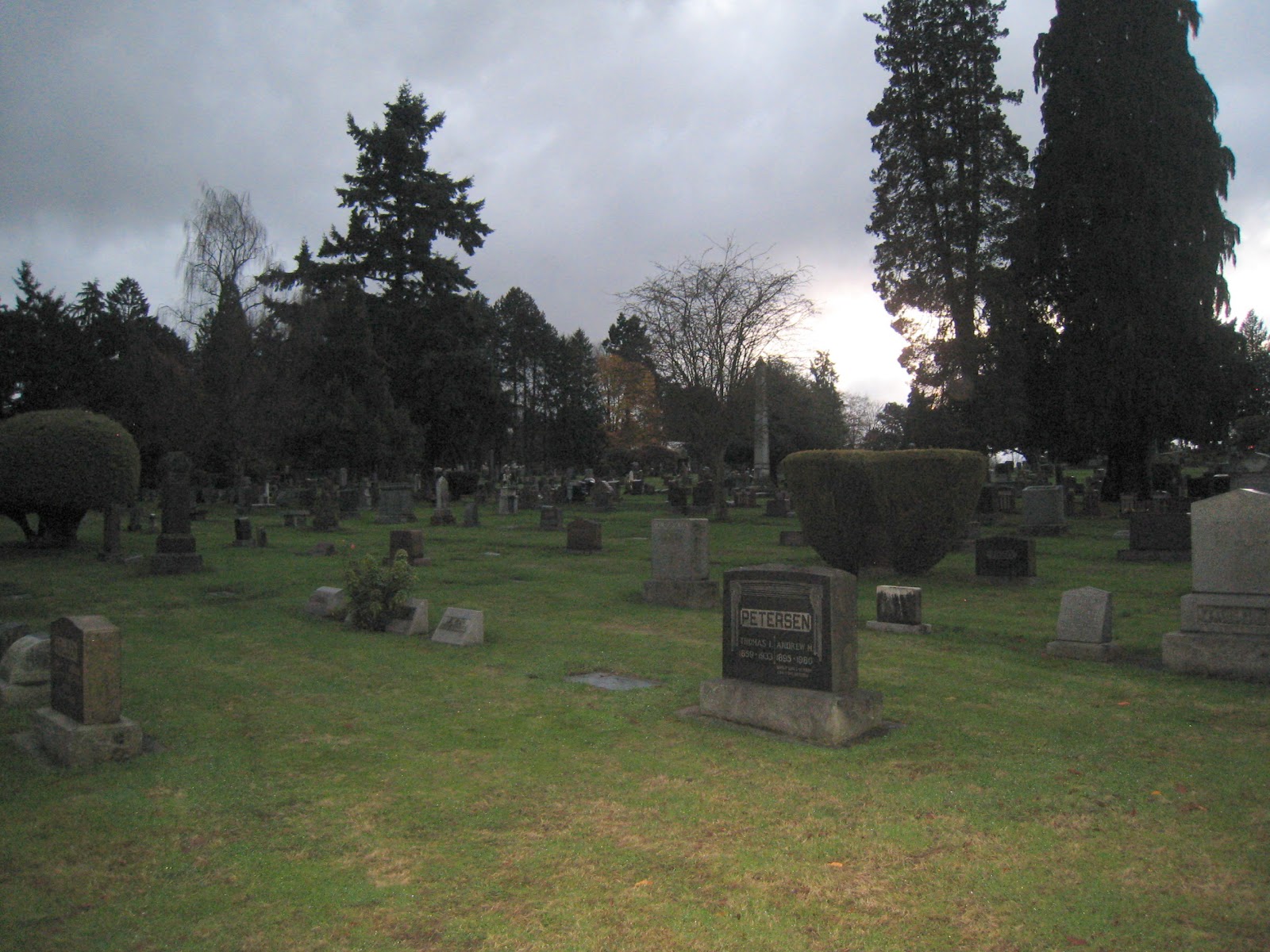 We were treated to a delicious dinner in Edmonds (north of the city) by my fiance's Aunt. What a treat!! We even happily helped her decorate her Christmas tree. 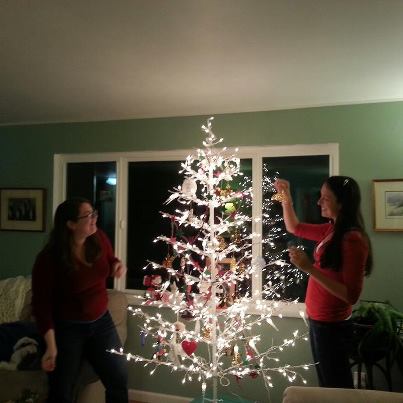 Only great things to report from Seattle so far.  Stay tuned for Part II!!

We had a Thanksgiving potluck at work yesterday. There is so much pressure associated with this kind of thing!! I always have these visions of impressing everyone with my culinary skills (b/c I can cook, wellllll, at least follow a recipe, I swear!!), but usually just end up bringing a bag of chips. This was our very first potluck ever...so double pressure.

So, I'm off to Seattle on Friday. It's my first trip there. I've been dreaming of going since my Nirvana grunge days ;) Yes, I had those. Didn't everyone in 1995?

I also had Thanksgiving dinner sprung on me on Monday. I'm making my first ever...sort of last minute. Hardly enough time to thaw the dang turkey!!

Needless to say, I have a lot going on this week.  I did manage to do a little better than a bag of chips, but certainly no mindblowing culinary feats. :) 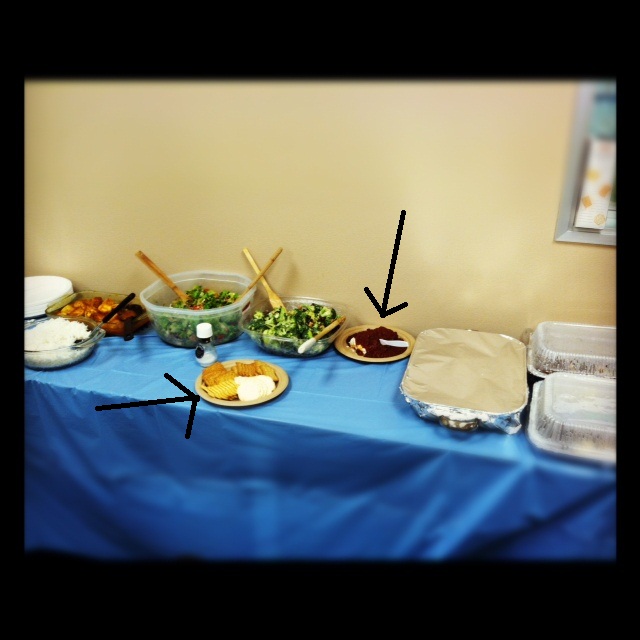 I am eternally thankful for the silly stress of having TOO much food to cook when so many have so little, for my wonderful and supportive friends that are always up for whatever, for my loving family who I am blessed to be very close with and my fiance without whom I would be lost.

So, I'm new at this...like, REALLY new at this (read: I have no idea what I'm doing) , but I love the blogger world. It makes me happy...and keeps me from being bored at work :D

I've wanted to do this for a while and here I am finally doing it!! I think the number one thing holding me back was a blog name. How do you come up with a name that is soooo identifying?? I've been thinking of it for a while. My best friend and I email each other every day...about all of our problems/joys. We've joked for some time about having a blog called "The Kind Bitch"--since that's kind of what our emails are about...you know, whining about life and the people we know...but in a 'kind' way. haha. But this is my blog...so hrmm.

I'm getting married next year and I finally came up with a name combining my first name and what will soon be my new last name. I'm soooo clever ;)  Also, I use too many emoticons...so if that bugs you, well sorry, but it likely won't change :P

So yay for a first blog post and a blog name. I'm on to something here.
Posted by KellVille at 8:17 AM No comments: